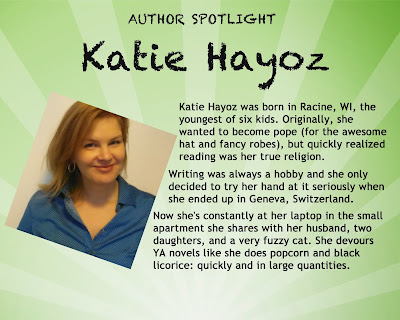 Holly-jolly goodness from the desk of Katie Hayoz:

Favorite gift: When I was a kid, we were allowed to open one gift before dinner on Christmas Eve, then we had to wait until after dinner to open the rest. I have five brothers and sisters, so years ago the pile of presents under the tree was INSANE. It actually took over most of the room and trying to decide which package to open was a challenge. But one year there was a garbage bag with a shiny silver bow there for me. I opened that one before dinner, and inside were about 20 pink feathered muffs (you know, those things you put your hands in to warm them if you're a Victorian lady without mittens). It was the craziest, weirdest gift. But I loved those things! I used them as fancy Barbie comforters, Barbie throw rugs, I put them around tin cans to make fuzzy containers for change... It's the only gift from childhood that sticks in my memory.
Who I'd like to meet under the mistletoe: OMG, Robert Downey, Jr. I freaking love that man.
Most frightening moment: We used to celebrate St. Nick's day, where St. Nick would come and leave bags of oranges and peanuts and coloring books outside the front door. But he didn't just leave the stuff. In our family, he'd announce his presence in the dark of night by banging on all of the windows as he ran like lightning around the house. It was freaky and creepy and I loved it. I always grabbed my bag of goodies off the porch with shaky hands. I had the sense St. Nick would nab me if I strayed too long. 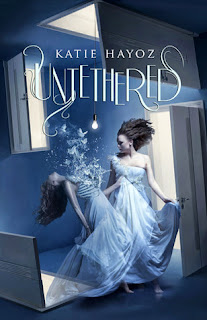 A young adult novel about jealousy, obsession, and astral projection.

Sixteen-year-old Sylvie isn’t comfortable in her own skin. In fact, there are times she can’t even manage to stay inside it. But if there is one thing she’s sure of, it’s her love for Kevin Phillips. She’s willing to stake everything on it -- her family, her friends, and possibly her soul.

Junior year is off to a less than stellar start for Sylvie: Her parents are splitting up, her little brother is sitting at her lunch table, and she’s the target of the school bully. Plus, she accidentally astral projects, slipping out of her body again and again at all the worst times. Sylvie is cast as the class freak and a medical misfit. She wishes she were somewhere else. Someone else. But it's only when her best friend catches the attention of the boy Sylvie's loved in secret since the fifth grade that Sylvie makes up her mind to do something drastic.
Sylvie intends to get Kevin by any means possible -- even if it involves treachery, deceit, and the insidious side of the paranormal. After years of trying to ignore her ability to astral project, Sylvie finally decides to embrace it. But she also decides to embrace the shadows that accompany her on her out-of-body experiences. Opening herself up to the shadows and their evil, Sylvie comes up with a dark plan. She is positive her scheme will give her what she wants, but she doesn’t count on it all spiraling out of control.

Untethered by Katie Hayoz explores the intoxicating and dangerous world of jealousy and obsession when coupled with paranormal ability. It is a touching, sometimes funny, sometimes heart-breaking novel that speaks to the self-doubt lurking in us all.
˃˃˃ Runner up in the Mslexia Children's and YA Novel Competition.

Scoop it up on Amazon  & add it to your shelf onGoodreads!

Connect with the super-sweet Katie Hayoz:

Enter here for a chance to win Katie's debut novel Untethered
and 16 other great novels.