It's world water Day and what better way to celebrate than a post from Amber Garr, one of my all time favourite authors.
If that were not a big enough treat, here is her cover reveal!
Enjoy!


Happy World Water Day! And happy cover reveal day for The Water Crisis Chronicles Book 0.5. As a part of today's celebration for raising awareness about water and energy consumption, I thought I'd celebrate with a cover and website reveal!


First, here's the cover and blurb for WATERFALL... 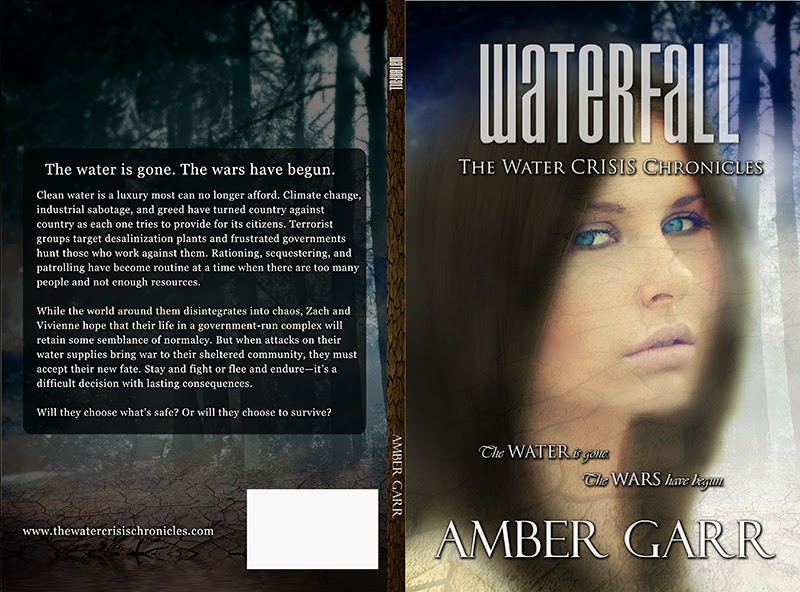 The water is gone. The wars have begun.

Clean water is a luxury most can no longer afford. Climate change, industrial sabotage, and greed have turned country against country as each one tries to provide for its citizens. Terrorist groups target desalinization plants and frustrated governments hunt those who work against them. Rationing, sequestering, and patrolling have become routine at a time when there are too many people and not enough resources.

While the world around them disintegrates into chaos, Zach and Vivienne hope that their life in a government-run complex will retain some semblance of normalcy. But when attacks on their water supplies bring war to their sheltered community, they must accept their new fate. Stay and fight or flee and endure—it’s a difficult decision with lasting consequences.


And now you can learn more about Zach and Vee's world, the government, the timeline, and what you can do help bring clean drinking water to the millions who don't have it (more about that coming later).

You can also read about how the series began with WATERPROOF sporting its new cover makeover as well!

Dying of thirst is the new reality.

Five years after the last drop of clean water disappeared, global societies collapsed and nuclear war shattered all hope of recovery. In a place now only a skeleton of its former self, survivors fight to avoid capture by the government. Forced to work in factories that produce the only drinking water available, those who go in, never come out.

Zach and Vivienne have lived as deserters since they were teenagers. Fighting amongst their own and scrounging for the necessities of life, they’ve learned to rely on each other in every way. Yet when tragedy strikes and the true objectives of the government facility are revealed, their world is ripped apart.

A fate once thought to hold their demise may be the sole answer to their survival. Who can they trust? Who can they believe?

In this life, it pays to be waterproof.